Herbert James Gunn, later known as Sir James Gunn, achieved fame as a distinguished portraitist; he was also a talented painter of landscapes and seascapes.

Born in Glasgow, the son of a prosperous draper, he began his training at the Glasgow School of Art and the Edinburgh College of Art.   He then continued his studies in Paris at the Académie Julian under Jean-Paul Laurens.  At the outbreak of the First World War, Gunn enlisted with the Artist's Rifles and served with the 10th Battalion Scottish Rifles in 1917.

When the War ended, Gunn settled in London and established himself as an eminent and sought after portraitist.   In January 1919, he married a widow, Gwendoline Charlotte Thorne, with whom he had three daughters.  They divorced in 1927 and in 1929 Gunn married Pauline Miller, the model for some of his most famous portraits, with whom he had a son and daughter.

'The Raft', c.1919. The location of the scene is most likely Bexhill-on-Sea.  During the 1920s, Gunn, his first wife Gwendoline Thorne (whom he married in 1919) and their three daughters Diana, Elizabeth and Pauline, took frequent holidays on the Sussex coast. 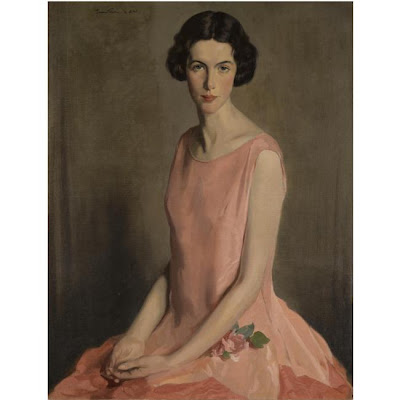 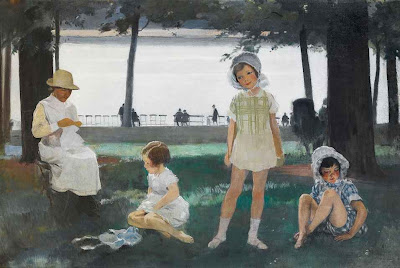 Portrait of group. 1929. Sir Herbert happened upon his children by chance at London Zoo where he was preparing animal sketches for a mural. The children, Pauline, Diana and Elizabeth, were with their nurse, who agreed to return with them for future sittings in Regent’s Park. The nurse features in the picture alongside the children.

He exhibited at the Royal Glasgow Institute of Fine Arts, the Royal Scottish Academy, the Grosvenor Gallery and the Royal Academy, London.  He won a gold medal at the Paris Salon in 1939 and was elected President of the Royal Society of Portrait Painters in 1953.

'Conversation piece at the Royal Lodge, Windsor'. 1950. After a successful career, Gunn later became a member of the Royal Academy and in 1953/4 he was invited to paint Queen Elizabeth II in her Coronation robes, a picture that hangs in the Royal Collection to this day.

In 1956 he was elected an Associate member of the Royal Academy and made a full member in 1961.  Gunn was awarded a Knighthood for services to the arts in 1963.  The artist died a year later.

A major retrospective of his work was held at the Scottish National Portrait Gallery, Edinburgh in 1994.