Celebration ends with a dinner gala in Garnier Opera in MonteCarlo for all the guests.

The couple enter in the Garnier Opera...Charlene and Albert seem happy.

Victoria and Daniel of Sweden

Margarita and Louis Alfonse of Anjoy. Princess Mary of Denmark and Prince William of Belgium Marie of Denmark and Daniel of Sweden Today was the religious ceremony in Monaco. Charlene was ok. I liked that she wore no jewelry -only a hair accesorie- it shows that is a simple person. Grace Kelly was not jewelry (except earrings). I refer to in my opinion, when a girl - that does not belong to royalty marries a prince- is in bad taste that she adorned with crowns and tiaras. This is my opinion, of course. Perhaps I am wrong.

The dress is very appropriate because Armani Prive (people say that she designed the 100 % of the gown) and conceals his vast shoulders. I would not have chosen this dress for me, it is not my style, but she did very well. I liked the naval uniform of Alberto Do not you remember the captain of "Love Boat"?

The guest were very elegants too. Specially Princess Caroline and Princess Maxima of Netherlands. But what happened with Spanish monarchy? Why they haven´t assist?

Elegant Princess Caroline of Monaco and her smaller daughter, Alexandra of Hannover.

Princess Maxima and William of Netherland.

Duke Louis Alfonse and Duchess Margarita of Anjou, heirs to the crown of France.

Charlene´s mother, Lynette, with her two sons: Gareth and Sean.(She was very beutiful and right).
...In 1956:
Grace and Rainier also have a great celebration. Grace weared a stunning lace renaisse dress who was designed by Helen Rose and it was a present from Mgm. There has not exist a bride like her. 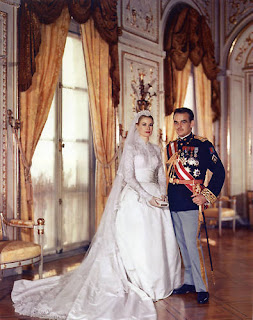 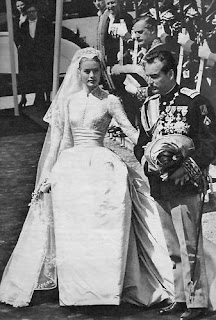 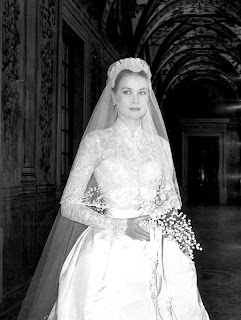